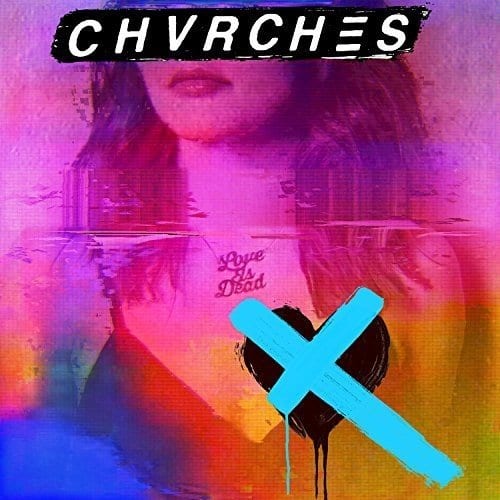 In a sense, it feels like CHVRCHES’ first two albums were warmups for Love Is Dead. The trio of Lauren Mayberry, Iain Cook, and Martin Doherty spent The Bones of What You Believe and Every Open Eye getting their feet underneath them, honing their songwriting and performance chops for what would eventually be their big breakthrough. That they also spent those two albums pulling in a vocal, devoted following was something of a bonus, but that’s what happens when you combine Mayberry’s effervescent vocal style with an emotionally raw lyrical bent. That’s what happens when you combine pop instrumental sensibilities with a decidedly artsy approach to melody. That’s what happens when you write songs as pure and lasting as “The Mother We Share”, “Gun”, and “Clearest Blue”.

That is to say that CHVRCHES has momentum on their side, and they know it, and Love Is Dead is their answer to how to put that momentum to good use. This is an album whose makers are screaming “we’re ready for the spotlight”, whether or not the sentiment is actually true.

Most of Love Is Dead features ex-Geggy Tah instrumentalist Greg Kurstin behind the boards, which likely has less to do with his indie rock ancient history and more to do with his production and instrumental work on songs like Adele’s “Hello”, Kelly Clarkson’s “Stronger”, and most of Sia’s chart output of the last few years. These are songs featuring strong female leads that also stuck to lofty heights on pop charts for nigh-interminable lengths of time. Kurstin’s involvement gives Love Is Dead punch, the beats pop out of the speakers, synths weave in and out of the mix as if they’re dancing, and Mayberry is there, right out front, strong yet vulnerable, powerful yet approachable, and just slightly too pitch-perfect to be entirely human.

Kurstin’s best work is right there on the first single “Get Out”, a song that appears to be about a relationship straining under the weight of expectations, though the lyrics are so vague as to be nearly non-existent. Truly, they don’t need to be all that meaningful, when the melodies soar so high, and the electronics buzz and whir so insistently. “Get Out” may actually own the catchiest chorus that CHVRCHES have ever written, the type of anthemic audience-baiting that will have fists in the air and euphoric faces to the sky for years to come, every one of those faces having assigned meaning to those vague lyrics that make Mayberry’s words feel written just for them.

This appears to be the tack that Mayberry used throughout Love Is Dead, a turnabout from cutting lines like “You think I’ll apologize for things I left behind but you got it wrong / And I’m as sane as I ever was” and “Who are you to tell me how to keep myself afloat? / I treaded water all the while you stuck in the knife that you held at my back”, lines that offered a hyper-specificity that made us feel like we were seeing behind the curtain of Mayberry’s life. She seems to be writing for us now, instead of writing for herself and allowing us in, and that feels like something lost.

It would be a sacrifice worth offering, however, if all of the songs were up to the level of “Get Out” in terms of pure melodic construction and drive, but they’re not. Again, they sound great, but major keys and energy can only lift a song so far, and most of these songs just don’t have the “it” that “Get Out” has to turn them into old-fashioned singalong earworms. “Deliverance” borrows religious obstinance as a metaphor for an inability to evolve within a relationship, which is a solid if well-worn theme, but does nothing with it besides repeat two-syllable phrases over and over again. There’s very little arc to this song, and while it’s immediately pleasing to the ear, it’s also utterly forgettable. “Forever” has a lot of drive in its very A-Ha beat, but the utter lack of progression from the first verse and chorus to the second is terribly disappointing — there’s a verse, and a chorus, then another verse, then another chorus, and then a bridge, and another chorus, and done. There’s very little in the way of climax, or build, or layering. It just happens.

Perhaps the most interesting of the album’s failures is “Heaven/Hell”, a great idea for a song that unfortunately suffers from the lack of gravitas in Mayberry’s voice — give it to Pink or Lady Gaga and it’s likely an immediate hit, as it’s just begging for some melodrama in its performance. Mayberry’s specialty is the kicker that hits you out of nowhere thanks to her deadpan delivery. She just might not be built for universal sentiment.

Some of the best moments of Love Is Dead veer from the path of the wannabe pop hit. “My Enemy”, on which the National’s Matt Berninger sings the verses, is a little sleepy, but also rather humble and likable. “Really Gone”, shoved deep into the second half of the album, is just a pulsing synth and Mayberry’s voice, a perfect showcase for vulnerability and sadness, the most affecting thing on the album by far even if it does sound out of place amongst all the energy and dance beats. “ii” is an interesting little piano interlude in the vein of Depeche Mode’s Violator B-sides, even if it is here primarily as an extended intro for the unremarkable closer “Wonderland”. On the other hand, “God’s Plan”, Martin Doherty’s token lead vocal, is not only uninteresting, it almost sounds lazy, and should have been cut altogether.

Someday, CHVRCHES are going to have one hell of a best-of compilation to put out. To date, however, they’ve never put out a complete album that is start-to-finish brilliant. There are enough brilliant and wonderful moments in each to recommend them, but they are let down by some fatal flaw that keeps them from reaching the pantheon. Love Is Dead continues in this tradition — its high points are some of the highest CHVRCHES have ever reached, its lows a combination of missed opportunity and wasted potential. Love Is Dead is not a bad album, it’s just that this felt like CHVRCHES’ time for a great one. Love Is Dead is not that, either.

“What I Can See Clearly With My Drinking Eye”: The Artwork of Arab Strap