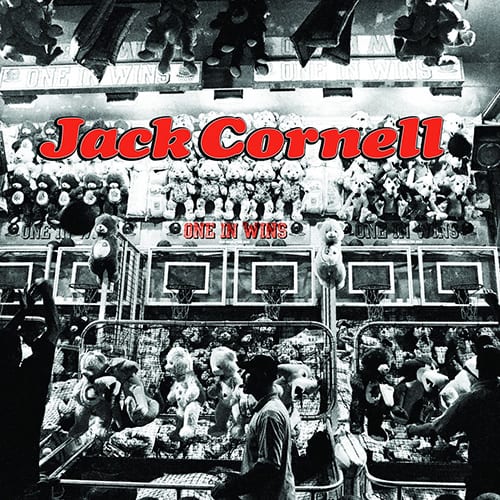 One in Wins
Jack Cornell
Independent

The Fabulous Knobs were legendary in the Triangle area of North Carolina (Raleigh-Durham-Chapel Hill) at the dawn of the 1980s. Their music was an intoxicating mix of power-pop, 1960s Southern soul, and good old-fashioned rock ‘n’ roll. Void of any pretension, live the Knobs were, as a Facebook group devoted to them proudly exclaims, “The Triangle’s Best Party Band”. Their shows sometimes involved (or devolved into) full-on comedic routines. As with two of their most obvious influences, the Faces and NRBQ, fun was the primary goal.

By the mid-’80s, Knobs members Terry Anderson (drums), Jack Cornell (bass), and David Enloe (guitar) became the Woodpeckers, adding Dan Baird as lead singer (who would soon leave to form the Georgia Satellites, taking Anderson’s song “Battleship Chains” with him). The trio re-christened themselves the Woods after Baird’s departure. Though success never shined upon them as brightly as some of their colleagues, they were a much-loved and respected regional act.

As the years went by, Anderson and Cornell’s rhythm section stayed together through three of Anderson’s solo albums and the formation in the early 2000s as the Olympic Ass-Kickin’ Team, rounded out by guitarist Dave Batholomew and keyboardist Greg Rice. Now, all these different groups and lineups converge on Jack Cornell’s first solo album, One in Wins.

Born from Fabulous Knobs rehearsals for their first shows since the 1980s, the songs on One in Wins are musically what you’d expect from these veteran rockers, but with the added gravitas of experience and wisdom. But this is no December-sounding treatise on mortality. The songs here sway, strut, swagger, and stagger like the best latter-day Stones.

Released a month before the election, the first single, “The Man”, details the urgency of making your voice heard at a time when literally every vote counts. Although the election is over, the meaning behind the message remains. “Sho’ Nuff” is a rocker that reunites the surviving Knobs (Cornell and Anderson along with Keith Taylor on guitar and Debra DeMilo on backing vocals; Enloe passed away in 2007). To hear them banging it out in the studio again is a welcome sound indeed.

Most of the songs on One in Wins were written by Anderson, one of North Carolina’s finest songwriters. He has penned tunes for the Georgia Satellites, solo Dan Baird (“I Love You Period”), Etta James, JoDee Messina, Volbeat, and many others. His chops have not dwindled a bit, as evidenced by the immediately infectious “Gravity” (written with Cornell and Taylor), which would have brightened up any of the Stones’ 1980s efforts. While “Last Thing (On Your Mind)” is the best Keith Richards song he never wrote.

Throughout, Cornell’s voice is front and center. The perfect mix of Rod Stewart rasp and Keith Richards’s world-weary phrasing. Also joining in the fun are Olympic Ass-Kickers Dave Bartholomew and Greg Rice, along with (another legendary North Carolina band) Arrogance alumnus Rod Abernethy, Pete Petty, David Harper, and Eddie Berman. It took over 40 years, but One in Wins finally places Jack Cornell center-stage, and it was well worth the wait.