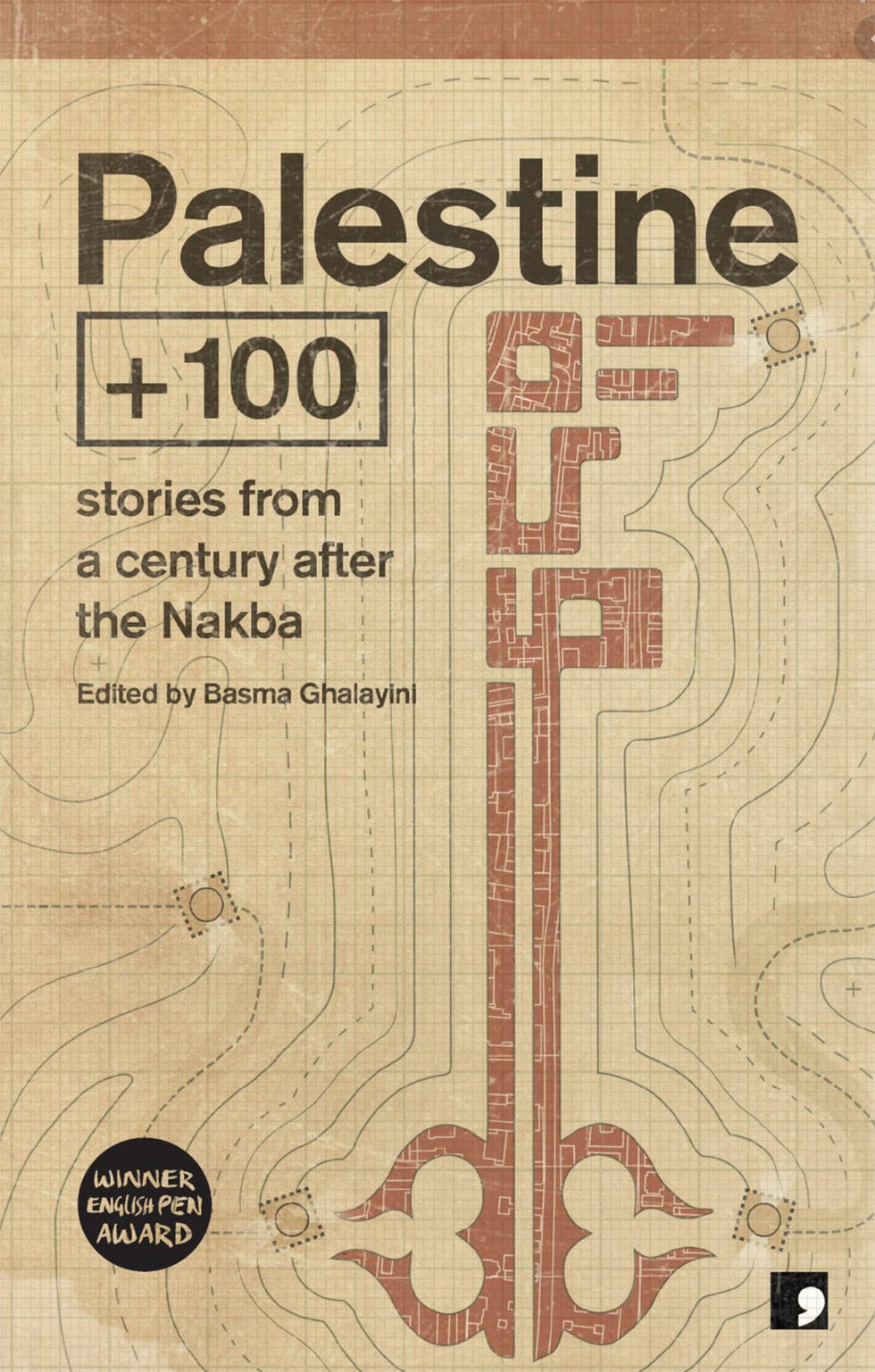 Palestine + 100: Stories from a Century after the Nakba
Basma Ghalayini, ed.
Comma Press

What will your world look like in a hundred years?

Such is the premise of much science fiction, since the genre’s earliest days. When posed in the West, the question produces imaginative elaborations on contemporary western opulence: cities in the sky; colonies on Mars; peaceful and adventurous intergalactic federations. It also produces dystopias based on our worst fears: alien invasion and colonization; erosion of freedom and privacy; climate ruin.

Pose the same question in a country already beleaguered by war, genocide, and colonialism, and the imagined futures are very different. Our imaginations, while inflected with hope and a measure of fantasy, remain indelibly tempered by a linear progression rooted deeply in the reality of our present.

Palestine + 100: Stories from a Century after the Nakba is a new collection of science fiction stories penned by Palestinian writers (and translated by a host of translators into English), imagining what their world might look like 100 years after the Nakba. Nabka is an Arabic word often translated as ‘catastrophe’. It refers to the displacement of more than 700 thousand Palestinian Arabs in the wake of the 1948 war, which resulted in the creation of Israel on Palestinian land. It’s the latest collection of speculative fiction from Comma Press, which in 2016 produced a similar anthology asking Iraqi writers what their country might look like a century after the destructive Anglo-American invasion of 2003.

The futures imagined in Palestine + 100 are rich, diverse, and like all good science fiction, they offer wise insights into the present.

Tasnim Abutabikh‘s “Vengeance” is a biting and powerful commentary on the futility of cycles of vengeance and hatred, offering as well a profound insight into the very real human feelings that propel such violence. Set in a futuristic world ravaged by climate change, in which protagonists navigate their brutal, transformed planet while still trying to enact vengeance for crimes committed against each other generations before. It’s a reminder that no matter how technologically advanced humans become, true progress will require not science but a commitment to forgive and move forward.

In it, the protagonist fails to realize the man he seeks to kill (for the actions of his great-great-grandfather) in fact holds the key to the survival of the would-be assassin’s mother. As it turns out, the entire cycle of hatred was predicated on a simple misunderstanding. The masterfully woven tale is set in a futuristic world, but shines a profound light on the shortcomings of our present-day selves.

Emad El-Din Aysha‘s tale “Digital Nation” is one of the few hopeful stories in the collection, depicting an emancipated, peaceful future brought about by its prefiguration in a virtual reality environment by a group of daring, shadowy hackers. It reminds the reader of the important sustaining role of imagination and hope, and suggests that daring to imagine the peaceful future we want is perhaps the most important step in bringing it into existence.

Several of the stories take virtual reality as their subject matter; a metaphorical sci-fi nod to the power of the imagination in helping us to transcend the travails of a burdened and oppressed present. Much like sci-fi itself, virtual reality allows the user to transcend the oppressive world around them, and reinvent both themselves and their world in countless ways, both hopeful and fantastical. Given the brutality of daily existence in a Palestine that is regularly bombed, reduced to rubble, and economically strangled by Israel and its allies, it’s perhaps not surprising that so many of the authors turn to virtual reality as a means of transcending the seemingly inescapable environment which surrounds them.

In Saleem Haddad‘s moving story “Song of the Birds”, a young girl receives ghostly visitations from her dead brother, and slowly comes to the realization that the peaceful, thriving Palestine in which she lives may in fact be a grand, Matrix-style façade imposed on Palestinians by their oppressors. It’s the high-tech version of the many walls and fences that imprison Palestinians in the present day. Indeed, Gaza has been called the world’s largest open-air prison.

In Haddad’s story, the virtual reality fence appears humanitarian, allowing Palestinians to think themselves happy, while in fact entrapping them in an existence wherein they have no actual agency or control. In an ironic and poignant nod to the present, the protagonist’s brother informs her the only way to escape this enforced virtual incarceration is death.

Fences and barriers recur throughout the collection, in myriad and creative sci-fi iterations of the real-life fences which imprison Palestinians today. Majd Kayyal‘s “N” offers a fascinating story of a world in which humanity has developed the ability to travel interdimensionally and access many parallel universes. This enables parallel Israels and Palestines to inhabit the same spot. There’s an element of hope in this beautifully wrought tale as well, in which the ability of young Israelis and Palestinians to travel between each other’s worlds turns out to be the key to achieving peaceful coexistence and happiness between peoples.

Another recurring element in the collection is the presence of futuristic drones and high-tech weaponry. Here too, we witness the juxtaposition of past and present. For many readers in the West, the notion of living in constant terror of attack by futuristic robots is still in the realm of sci-fi. Yet for those living in the Middle East, this erstwhile sci-fi trope has become an element of deadly daily reality.

The drones and weaponized robots in these stories are futuristic ones, of course – capable of everyday policing and making arrests, capable of horrific mass slaughter, capable even of independent thought – yet they are, in essence, simply imaginative iterations of today’s very real weapons of war. The ubiquity of weaponized drones in the ongoing slaughter and genocide perpetrated by western nations in the Middle East has left a clear impression on the imaginations of these writers, whose work reminds us that far too many sci-fi nightmares have already been brought to life, if inflicted selectively on certain populations and regions.

While several of the stories are dystopian, others offer hope, and it’s interesting how these often emphasize the urgency of peace and reconciliation not just for Palestinians, but for Israelis as well. Israelis are represented as suffering in different ways from their country’s ongoing repression and occupation of Palestine, and the political emancipation of Palestine is tied indelibly to a moral and spiritual emancipation for Israel. As an Israeli leader comments in “Digital Nation”, following the successful digital revolution by Palestinians depicted in that story: “Don’t look so glum…You should thank the Arabs. They’ve finally allowed us to become ourselves again, start building anew without being afraid somebody is going to foul it all up for us when it’s really us that is the problem.”

Similarly, a character in Anwar Hamed‘s “The Key” races to develop an effective high-tech method of isolating Israel from its enemies, recognizing that Israel’s violent solution to coexistence with its neighbours is doing irreparable damage to its own people (and believing, erroneously, that isolation would be a better solution). His research convinces him that “the Arab citizens were not the true danger to the state. They could sometimes get frustrated, true, but this could be absorbed with greater economic opportunities and some pragmatic policies. In fact, the findings suggested Israelis should be more concerned about their state’s increasingly harsh political positions towards the Arabs and the increasing power of an inward-looking, almost tribal political faction. ‘The idiots!’ he would yell, in agreement with the research. ‘They’re toying with the future of the state.'”

There are other fascinating stories in the collection. “Application 39”, by Ahmed Masoud, imagines what an Olympics might look like in a future free Palestine. “The Association”, by Samir El-Youssef, imagines a futuristic Middle East where peace has been achieved by banning the study of history, and what the rebels of such a world might look like.

Selma Dabbagh‘s “Sleep It Off, Dr. Schott” and Mazen Maarouf‘s “The Curse of the Mud Ball Kid” are rich stories whose complex layers of meaning are presented in more experimental styles of writing, wandering deep into magical realism in the latter case. Anwar Hamed’s “The Key” has tinges of a horror story, reminding us that no matter what sort of technological fences and barriers are developed to keep Palestinians out of their own land, the ghosts of that land’s past will never truly disappear.

These, and other stories contained in the anthology, situate Palestine + 100 as a richly imaginative collection not merely in the traditional sci-fi vein of imagining possible futures, but in weaving powerful messages about our present in and through these futuristic imaginings. For readers in the West who might not have associated Palestine with science fiction, this rich collection quickly dispels such preconceptions, and offers a deeply rewarding addition to the global sci-fi canon.