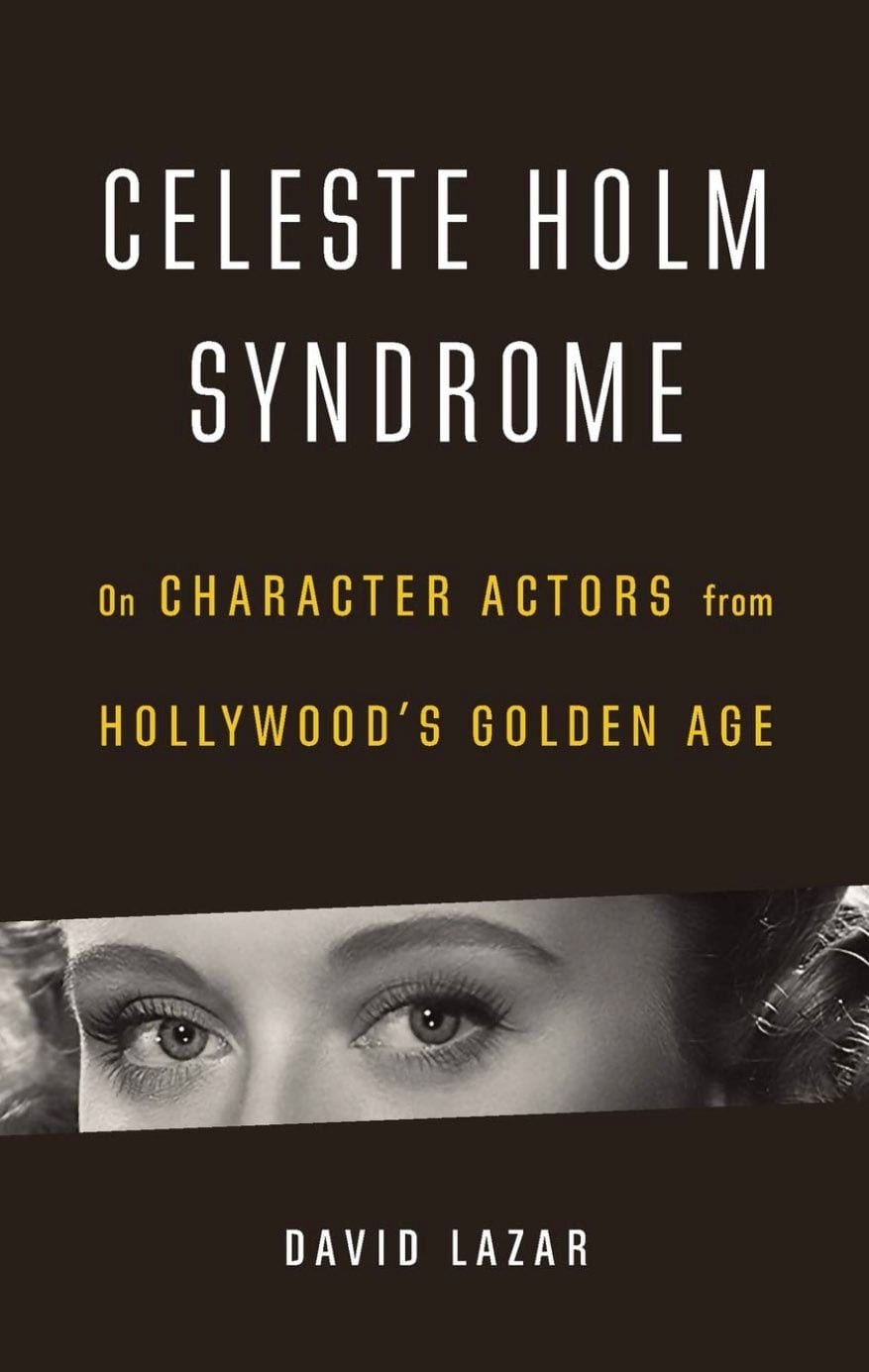 It’s hardly by accident that David Lazar mentions legendary character actress Thelma Ritter within the first sentence of this wonderfully incisive, reflective collection of essays about the world of character actors. Ritter appears in Alfred Hitchcock‘s Rear Window (1954), as Stella. With just a look she conveys her character’s puzzlement over James Stewart’s L.B. ‘Jeff’ Jefferies choice of Lisa Carol Fremont (Grace Kelly) as his girlfriend. With that look alone Ritter shows how character actor work is about scene-defining, not scene-stealing. As Birdie, Ritter was the secret weapon in All About Eve (1950) and remained, for the rest of her career, in the role of a character actor. IMDB

Just as quickly as he mentions this prototypical character actor, Lazar notes that he didn’t want his focus to be on her or any of the others known and loved by even the most casual cinephiles (as he calls himself.) That would be too easy. Instead, Celeste Holm Syndrome uses Ritter’s career as a launching pad to discuss the very nature of character. Lazar wonders if “character” is as Kierkegaard noted) engraved and deeply etched. If not, can a leading actor (like Bette Davis) also be a character actor? He’s using “character” as a noun (e.g., the name of a player in a film) and adjective (e.g., that essence that makes the character a distinctly original presence and driving force in the plot). Are character actors the steam that powers the engine of the film? Lazar explains: “Character actors play with our sense of not just what a character is but what character is…how closely guarded the inner life can be.”

Lazar understands that we are discerning viewers. Like him, we treasure and have memorized lines like “Fasten your seatbelts. It’s going to be a bumpy night.” from Margo Channing (Bette Davis) in All About Eve. It’s a declaration that the truth is finally going to be revealed at a pivotal party in the 1950 classic. We know Margo said that line, but in his essay, “Celeste Holm Syndrome: The Eyes of Sister Scholastica”, Lazar reminds us that the declaration was in response to a question from her best friend, Karen Davis (Celeste Holm.) Karen’s question is simple: “Is it over or just beginning?” From that simplicity, we get the importance of the character actor. They’re the sparks that light the fire.

What makes this essay so distinctive and indicative of Lazar’s careful approach is that he lets us know these pieces from films are not purely star profiles. He’s going for something deeper here. He writes about Holm and brings in other character actors of the time: Nina Foch, Eve Arden, Eleanor Powell. They were younger stars always linked to older male counterparts. Lazar writes:

“…I have always linked these four women…to a very specific kind of degradation…that speaks to the kind that speaks to the atrophied and damaging desires of men for younger women…pliant…teachable, educable, and whose power wasn’t commensurate, or even threatening.”

In “Ma, Five movie mothers with a coda on Hitchcock”, Lazar looks at the strength and fortitude of great maternal characters like Jane Darwell as Ma Joad in

Grapes of Wrath (1939), Elizabeth Wilson as Mrs. Braddock in The Graduate (1967) and Marge Newquist in Little Murders (1971), and Margaret Wycherly as Ma Jarrett in White Heat (1949.) For Lazar, the idealized and complicated mothers characters could effectively minister to the needs of idealized and complicated sons. Who are these characters? He writes, “…I’ve always been attracted to people with wounds.” Consider Wycherly’s Ma Jarrett in White Heat (1949), and understand that this clingy and all-consuming old moll was the “Ma” in question who received unrepentant gangster Cody Jarrett’s (James Cagney) declaration “Top of the world, Ma!” Lazar writes: “They’re the Bonnie and Clyde of a kid and his mom.”

Cody Jarrett was a killer. His reaction in jail after hearing news of his mother’s death turns him “…into a kind of wild animal of grief. Cody cannot believe it, and he just wanted the news repeated. “Movies and memory can run backward and forward in our minds,” Lazar writes, “tapered by language that chases its own tail…”

Lazar’s inclusions of Darwell and Ritter are understandable and effectively rendered. The Hitchcock coda is strong as well, with examinations of how maternal comfort was all John ‘Scottie’ Ferguson (James Stewart) wanted from Midge Wood (Barbara Bel Geddes) in Vertigo (1958). He explores, too, the seductive strangeness of Cary Grant’s mother in law, Clara Thornhill (played by Jesse Royce Landis) in North By Northwest (1959), and the kitsch of Doris Day’s singing maternal superhero, Josephine Conway McKenna, in The Man Who Knew Too Much (1954.)

Motherhood and a son’s devotion to (or obsession with) it is complicated in Hitchcock’s work. He casts a light upon characters who have stayed long in the shadows. It’s a key strength to Lazar’s style throughout the entire book. When he looks at Mrs. Braddock (Elizabeth Wilson), mother of Dustin Hoffman’s Benjamin in The Graduate (1967), he explores the Oedipal implications implied in the story:

“In one scene, at the end of the brilliant confusion of the ‘Sound of Silence’ sequence, as Ben moves from home to hotel room with Mrs. Robinson in an almost seamless editing, Wilson watches him approach their pool, and she turns as we watch her watch him…we’re left…wonder[ing] what this mother thinks of her son, how her inner life is making sense of his.”

It’s this familial preoccupation with actors on the margins of Hollywood cinema that makes this collection so captivating. “I remember walking into my parents’ bedroom…the black-and-white TV screen throwing light from a corner…I wanted to get close to them…I moved closer and heard my father’s voice more clearly…He was naming the characters who swirled around the margins…How could they know the name of such unimportant players. Why would they?”

In the essay, “Martin Balsam: The best possible Arnold Burns”, Lazar connects his father Leo with the titular title character actor. Both were born in 1919, and Balsam was a client in Leo’s midtown Manhattan Comet Travel Agency. Again, Lazar’s strengths are seen in his attention to the little details of pivotal scenes in the career of a great character actor. He looks at Fred Coe’s 1965 film, A Thousand Clowns, where Balsam plays the conformist brother to Jason Robards’ non-conformist mid-60s free-thinker. Balsam was the perfect everyman. Lazar writes:

“His look was the opposite of heroic…He could be memorably rueful, or slightly pathetic at his best.”

Characters are chameleons, drifting in and out of scenes, sometimes heroes and villains at the same time, and they’re at their best when they are both supporting and defining the course of a great film. Lazar writes about comedy and pain, about the two Oscars (Wilde and Levant), and the consistency of Preston Sturges‘ ensemble company. He writes of character actors like Alan Bridge, and their distinct voices: “Voice is so hard to describe without referring to other voices-it’s all metaphor…Bridge’s voice was middle range…not quite guttural, but as though the sounds were being slightly squeezed…”

The voices of Alan Bridges, William Demarest, Judy Holliday, and Eddie Bracken echo in our ears as their faces remain imprinted in our collective memories. Their work serves as blueprints for greats such as Ann Dowd, Giancarlo Esposito, Margo Martindale, and Stephen Root. What they bring to their performances has as much to do with the emotional investment we make in recognizing them, time and again, as it does with their professional work ethic and training. Lazar’s Celeste Holm Syndrome reminds us that even the quietest presence or briefest screen time from these supporting players with a seemingly tireless work ethic and deep well of modest humility can leave a lasting impression.